The Orangutan-in-Chief’s pick for Secretary of Education? An original Michigan Monster. In charge of National Education Policy, equipped with a whole bachelor’s degree in business administration and political science from Calvin College, and highly skilled by marrying a guy who inherited gut-buckets of money from his dad’s low-quality household chemicals direct sale pyramid scheme ,  Betsy is looking to go national with her demonstrably catastrophic work allocating education and education funds to wealthy white people, mostly.

I do believe in small schools, and I do believe in schools of choice – sounds nice, right? Probably means that the kids in Detroit get bused, for free, with snacks, to the same schools that Betsy’s friends’ kids attend (she home-schooled her own kids, because, obviously, she hates school) But that’s not what it means. That’s not what it’s all about.

Here’s what it means for Detroit.

Why would you give the important job of Sec. of Ed. to this bigoted creep? It’s not complicated – you do it because you’re hoping she’ll help you steal money from people who can’t defend themselves, like the Repiglicans in Michigan steal money all the time. Pure Michigan Kleptocracy. From seniors, through more taxes and less deductions for individuals, from the working poor, by fraud, whatever.

It’s so transparent, too. Here in MI, the shift of funding from public schools simply means that our poor urban or rural students get no education. The money is taken from public schools and given to opaque private entities who are held to no educational standards, so their students don’t necessarily get education either- but even if they do, you won’t find those for-profit schools and other charters that drain money from the public located in poor areas; those children have no “schools of choice”. They get left disintegrating, poisonous buildings and dwindling teachers, who get their pay cut and withheld. The poor have no advocate, and the kleptocrats have quit even PRETENDING to be decent human beings. Fascinating times.

Here’s the hilarious thing: Betsy DeVos can’t even honestly buy her way into a position for which she is utterly unqualified. That’s pretty sad. And, her appointment? Well, cruel. 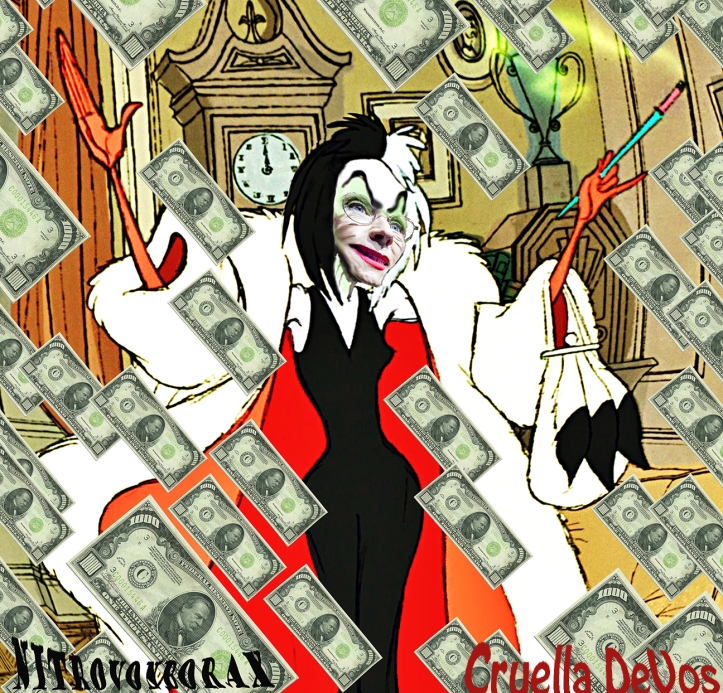