How nice to see you! You look soooo old!
Well, sweetie, I’m very excited today!
At 4 PM
I go for my new triple-tier eyebags.
I have been scrimping and saving for this operation for months,
Even to the point of curtailing my windsock expenditures.
I had to get a second job, as a reglazer
Of day-old donuts at the “Donut Make You HAPPY”
Drive-Through Donut Emporium.
(You know what my favorite part of the job is?  Taste my hand!
It’s still sweet, and I finished reglazing six hours ago.
Which helps with the food budget:
I pretty much just eat couscous and lick my hand sometimes)
With the 2 jobs it’s hard to find the time
That I now have to spend every day penciling in worry lines and eye crinkles,
Maintaining the grey highlights in my beard,
Encouraging my ear hairs to grow,
Putting rheum-drops in my eyes.
Keeping up appearances! You know how it is, dear.
And sometimes, when I’m in a hurry, I forget to stoop and shamble like I should.
I’ve been wearing dentures, but sometimes they slip,
And people see that I’m not actually missing my natural teeth, which is SO embarrassing.
Oh, for a pure pink set of plain gums,
Like the very-very-harridan Milvie Spinkle-Thorpe
Was seen chortling carelessly through at the premiere of
“TOO OLD FOR THAT!!!” at Cannes.

I’m going to level with you, honey, it’s hard to keep up
With the cutting edge of couture right now.
That pop musician Squindy Squills can’t be a day over 24 years old,
But with hundreds of thousands of dollars at her disposal
Earned from her hit album “I Got a Little Angina”
She suddenly looks like the most fabulously decrepit codger imaginable, almost overnight.
It looks like she’s had her back humped-
A total ass removal-
Designer-distressed knees-
And a full face drop-
Wanda Limpe-Forque definitely has new wattles
And from her everplunging cleavage, I suspect she’s had extensive increased-gravity treatments.
You just don’t see natural early droopage like that here on Earth-
(My sources tell me Wiwi Norplebower was actually flown to Jupiter for a month
To attain the wondrous pendulousity
That was so prominently on display last month at the Glorioski Awards.)

Bags of cat hair and lint to roll in before you go out to dinner
Cost like sixty bucks
And you only get like an ounce per bag, barely three applications.

I have to shave my scalp thrice daily
Or I get stubble where my male-pattern baldness should be
My knuckles need surgical knobbification.
Though I have almost perfected my spinal S-Curve
And my chest grows more concave daily. My secret?
I’ve been sleeping every night in the clothes dryer with a bowling-ball on my chest.

I hear noted author Horbert Fuuche
Paid a murder of real crows
To roost on his face for two months
To acquire his lauded crow’s-feet.
You know how much a whole murder of crows costs?
I can barely afford a mugging of crows, myself

Incidentally since it’s just us two here and I really shouldn’t say anything
But you remember Melpha with whom we matriculated with?
Who always wowed the boys with her precociously ancient deportment?
I saw her just the other day in the grocery and
Darling
You wouldn’t believe the way she hasn’t let herself go-
Her cheeks are all pinkish and puffy
She doesn’t thin her hair at all
She’s got that blank unformed generic look
You’re stuck with before you get a personality
She’s as boring as any one plum on a big plate of plums or something

But it’s unkind of me to say so. She’s not well off-

Now,
If I had to say which of the celebrities I personally find most stunning recently,
I have to give it up to Miss Siphia Pimberly
As the hottest starlet of the year.
Oh her chin hair implants-
Oh the constellations of liver spots on her corrugated chest-
Ah the deflated and gelatinous biceps and buttocks-
The cracked and puckered sphincter of her lips- The hook of her nose-
Eyelids crepe-draping suggestively over curranty eyes-
Fairy-dusted in dandruff-
That sexy totter…
That babe is a Stone-Cold Crone.
Oh dear I’m slightly engorged just thinking about it, which reminds me
It’s time for my erectile dysfunction pill
Lest it belie the facade when that occurs
Within my Sans-A-Belt Polyester Slacks 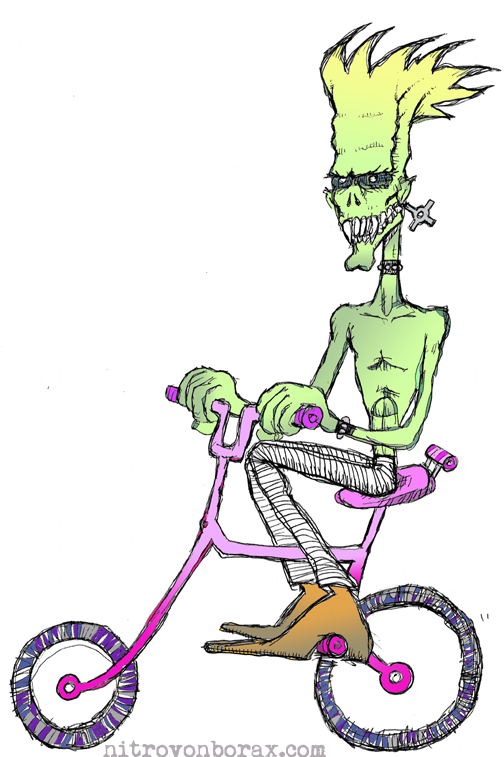