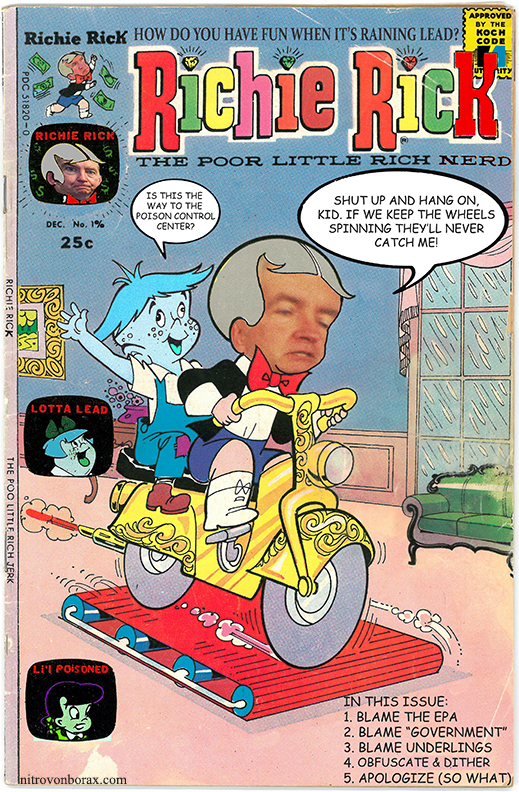 The governor, known for quick action when acting in the interests of the American Legislative Exchange Commission & other corporate friends (Boy, did he pass the Emergency Manager Law fast after the voters of Michigan specifically voted against it) is remarkably measured and thoughtful in his approach to doing anything at all in Flint- indeed, he may find it best to do nothing. He’s pledged like 28 million dollars, which is like pushing a fat man into a  tar pit and then offering him a thimble to bathe in.

Witness further muddying of the waters by the masterminds of this mass poisoning: continuing to blame specific low-level scapegoats and,  more pointedly, “failure at all three levels of Government- Local, State and Federal” (Except the governor had deposed the local government and was stonewalling the federal government). This useful narrative fits the agenda of dismantling the government’s social contract with and responsibility for the people.
Reports will be also released about unrelated lead exposure in other communities. Aw, heck. Lead is all OVER the place (Except, most of that lead wasn’t malevolently spoon-fed to people).

But, really, the way it works is it’s just this one guy that is, ultimately, responsible. That’s the governor. His name is Richard Dale Snyder, and he’s the guy made all the creepy decisions that precipitated this unnecessary, racist, atrocity.  He knew the water was really, really, really dirty for a year and a half and he knew the kids, the seniors, 102,434 people were drinking it.