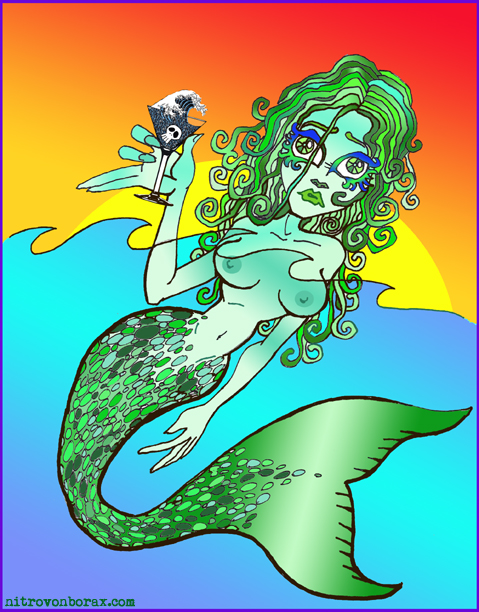 made this as an illustration for a Tsong lyric I wrote for Tsars: Just finished the illustration, now that it’s been 2 years since I was in the band- and a Tsplendid band it still is-

Her Watery Lair
She hears her ocean call
It echoes in her shell-like ears
And she casts one more glance at me
And casts herself into the sea
She’s in Poseidon’s thrall
His rolling waves engulf the tears
She’s weeping as she sings to me
And pulls me down into the sea
Once in her arms I find in tentacles I am entwined
Sinking down below to fathom where the dead men go
She drags me down so deep
To realms of the Leviathan
To dark forbidden mysteries
That lie in wait beneath the sea
On her ocean bed I’ll sleep
Never more to walk on land
Her lips give one cold kiss goodnight
She slowly rises to the light.
I hope she doesn’t weep for me, it’s really not too deep for me
I’ve simply traded light and air for one night in her watery lair…